RUSH: My friends, just to be clear so that you'll maybe be able to -- not understand 'cause I know you understand -- understand the context of much of the program today. None of this is making much sense to me. There's so much of this that doesn't make sense to me. And that is my overriding mindset here. I'm not off into conspiracyville, don't misunderstand. There's just some of this stuff that doesn't make any sense. And I continue to be scared to death over what we are doing to our economy.

I never have believed that anything like this would happen with people being ruined. It's hard to quantify. It's hard to describe. And I'm frightened for people. I'm more frightened -- you know there's a poll out that more people today are scared about the economic impact of all this than the virus. That makes perfect, total sense. I'm scared to death. I'm scared for the people of this country.

It was a three-year economic boom. And we ourselves turned it off. We ourselves shut it down. No matter where you go in the country, it's a ghost town. It's eerie. But underlying it all to me is just an abject fear for what this is doing to people. And then the long term changes to our country as a means of dealing with it that are being implemented and will be implemented down the line. And at the same time, aside from the president and other people like you and me out here, but in officialdom I don't see this fear, I don't see it reflected. I don't see the concern -- well, call it from the elites, call it from the establishment or whatever.

And that doesn't make sense to me. It seems to me that every American ought to be concerned about the economic impact of this and at the forefront would be creative, productive ways of ending it. Right now, another scary thing to me is it looks like there's no end in sight. There's a lot of talk about going back to work, lot of talk about restarting economy, but there doesn't appear to be because every time we talk about it, then we come back with "And this week and a half and is gonna be the absolute worst week and a half in the history of the country."

So they're saying forget anything in the next week and a half. And then when this week and a half goes by, what will be the excuse to forget the next two weeks? (interruption) No, I don't want people to die. Of course I don't want people to die. Do you know, in the Bill Bennett column that I cited, can I give you some stats that he has dredged up? Would you believe it if somebody told you that 98% of people who get this virus recover from it? You wouldn't? Why? Because that's not reflected in any media. Because the media reporting on this is creating the impression, if you get it, you're toast. If you get it, you're gonna croak. That is the overall attitude being conveyed.

Here's how Bill Bennett and Seth Leibsohn wrote it yesterday. "Did you know the chances of recovery from the coronavirus are about 98%--if you catch it? Did you know there are models showing 50% of the population may have already had it, never knew they had it, and recovered?" That would be herd immunity. Here's how Bennett and Leibsohn began the piece.

"As you know, the coronavirus--if you catch it, and get very sick--is a terrible thing to go through and you may even die. The virus and the fear of it are sorely testing our medical capacity in some places. And the body count will get much worse this week, right before Easter. The heroic efforts and sacrifice of many doctors, nurses, and volunteer civilians are all notable and praiseworthy. Millions of Americans are pulling together. We all know this. But do you know the odds of any American getting this virus?"

In other words, what are your odds of getting it? Has anybody reported it? "One would think that number is easily known or available. It's not." Do we have a one in 10 chance of getting it? One in five chance? What are the circumstances in which our chances or odds increase?

Bennett again writes here that the chances of recovery from the coronavirus is about 98% if you catch it. By the way, Rand Paul has tested negative. He's just tweeted that he's back to normal. "Again, one would think that this data -" 98% recover, models show 50% of the population may have already had it. "One would think this data would be widely available and reported. It isn't. What is presented widely are numbers and warnings that scare and frighten us, and we are now being conditioned to a lot of panic and speculation. But part of the reason we are getting conditioned to a lot of panic is because of the wide range of speculation about other numbers we accept as our new fright-inducing reality, an increasingly confusing and frenzied set of numbers. And the normalization of our panic is having dire consequences and augurs for even worse."

"Our officials and media have warned us of 2 million deaths in the United States. Then 200,000 deaths. Then 100,000 to 240,000. This needs to stop. There have been a total of 68,000 coronavirus deaths worldwide. And we are told we will see, just in America, three to four times that number. Does that even pass the plausibility test?"

Sixty-eight thousand coronavirus deaths worldwide, and we're told that we're gonna see, just in America, three to four times that number? Four times six, 240,000, that's what the number is. Now, those numbers have been revised backwards, downward by the models.

"But there is more. With all the blaring chyrons and death and disease counts, has anyone tried to search for the average age of the death toll from this pathogen? It's very hard to do--though we are told the virus more maleficently affects those over 65, and is worse with each year of age. Why do you think this point, this fact, is not everywhere available? Could it be there is an investment and interest in scaring all of us? You can find some stories with state and local data, but isn't it interesting the general data is not available? Our best analysis shows in New York City 70% of the deaths are of those over age 65." 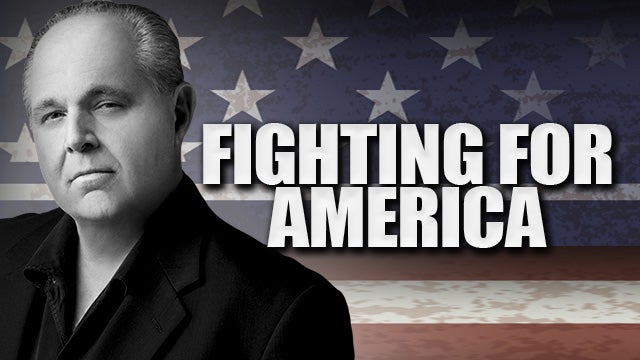 I just happen to have the numbers on this right here in my formerly nicotine-stained fingers. It's from the Rockland Westchester Journal News. It's part of the USA Today Gannett news empire. The majority of New York's more than 5,500 deaths due to coronavirus were among men, and 86% of these deaths were among people who already had underlying illnesses like high blood pressure and diabetes, and this is not this guy who wrote the story making it up. He says it's state data.

The data, the stats released late yesterday, offer the latest glimpse in how the rapidly spreading virus has impacted New York and made it the epicenter. Of the 5,500 deaths in New York since the first on March the 14th, 61% were men, 39% were women. Sixty-three percent of the deaths were among those age 70 and older while 7% of the cases were those 49 and younger. Of the 4,089 of those who died had at least one other chronic disease, the record showed. The leading underlying illness was high blood pressure, which showed up in 55 of the deaths. Next, diabetes in 1,700 of the deaths, about 37% of the cases. Other top illnesses found in those who died from coronavirus were hyperlipidemia, coronary artery disease, renal disease -- that's kidneys, for those of you in Rio Linda -- and dementia. For those of you in Rio Linda, think Joe Biden.

RUSH: There's still a couple things from the Bill Bennett column I want to share with you, but let's get started.

This Sean in Portland, Oregon. I'm glad you called. You're up first today. Great to have you here with us. Hi.

CALLER: Rush, good to hear your voice. Thank you. Happy Easter week to you. Hey, quick thought and question. Considering the low threshold of cases it took to have life and the economy shut down, I'm kind of wondering, what's the opposite threshold? How many cases will it take to start relaxing these restrictions and go back to normal again?

RUSH: Well, this is a good question. You know why? Because it wasn't the threshold of cases that shut the country down. It was these models projecting how many people were gonna die if we didn't. It was the models, Sean.

RUSH: It was the models predicting mass death, 2.2 million! You can't erase that number. It should have him been used, but it was; 2.2 million is the starting point. That gave them every weapon they needed to shut down the economy.

CALLER: Well, if that's the case -- and if these experts and their models set that up -- then it gives me pause to think that they're gonna want to drag this out until there's a number of cases so they can cover themselves to say, "We don't want it to spread rapidly again if we have even a small amount of cases."

CALLER: It seems like they're gonna use the models to help protect themselves as well as give an excuse to (crosstalk) drag this out unnecessarily.

RUSH: Well, this is something that the vaunted task force will have to figure out, the task force on restarting the economy. Because I want to remind you that every day when the subject comes up in the briefing, Dr. Fauci manages to remind everybody that there will never, ever be a return to normal until we have a vaccine. 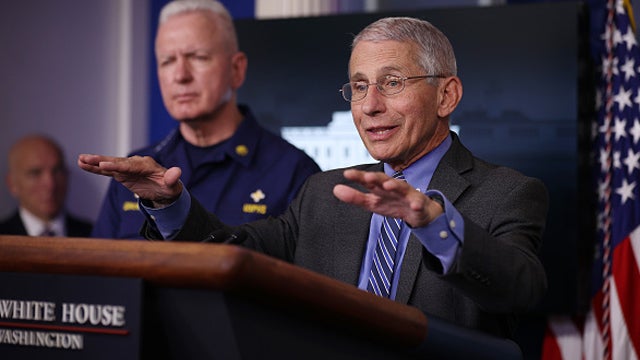 We don't have a vaccine for HIV, and that was Dr. Fauci's specialty.

That's what put him on the map.

We still don't have a vaccine for it.

We've got treatment. We have very advanced treatments for it. So the idea of putting people back to work based on the current way we're discussing this, you'd have to say never. If the objective remains what it is, never opening the economy. Now, that can't be. This isn't sustainable. We're beyond what was sustainable now, if you ask me, my humble opinion.